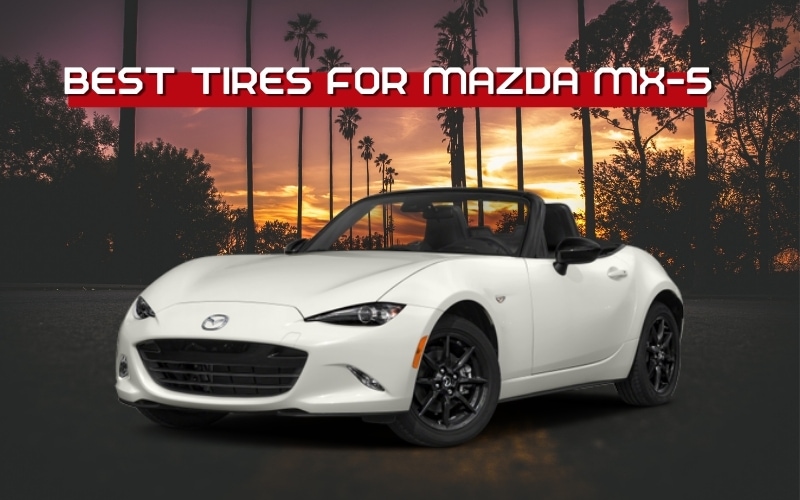 The Mazda MX-5 Miata is more than just a roadster. For many, it has been a way of life. It is an inexpensive alternative to high-end sports cars. But it also looks great, and has for three decades. The Miata has been revered by fans and critics alike. As it is mostly driven by enthusiasts, and is an all-rounder; it deserves a proper set of tires. So, coming up are the 10 best tires for Mazda MX-5 Miata.

At the bottom, you’ll also find a buying guide. So, let’s begin.

The first entry here is one of the best tires for Mazda MX-5 Miata. It is an all-season tire with an enhanced Oil tread compound. The tread pattern is asymmetric in direction. The result is that you get wet and dry handling all year long. The compound is good for the environment as well. Furthermore, the tread and its width also give it better handling at high speeds. It isn’t quite cut out for the ice though.

On snow, there is improvement because of the aforementioned compound and sipes. On wet roads, the triple 3-dimensional sipes and the 4 circumferential grooves come in handy. These channel water together to prevent hydroplaning. But it’s not just performance-oriented. The shoulder blocks and pitch sequence make it comfortable. Finally, with the underrunning steel belts, the tire is durable as well.

Here’s another of the best tires for Mazda MX-5 Miata. Its massive grip comes from its tread compound, that has 4-times more silica than its peers. The tire is durable and its tread profile prevents uneven wear. The Stabiledge tech and the 3-dimensional micro gauge grooves improve the handling and stability. Other than that, there are extra biting edges for reliability on wet roads.

The refinement is also there with this tire. You won’t be getting any vibrations on the road. The tire is quiet as well. The warranty is good and can go up to 60k miles depending on the size. There are disadvantages as it certainly doesn’t outperform winter tires in snow.

The Premier A/S from Michelin takes the cake here. This tire is not about driving at lightning-fast speeds. But it is about calmness and composure with its spectacular stability. The new tread compound is composed of silica and sunflower oil. Michelin’s patented Evergrip technology is a part of it. So, it brings about a better grip on wet roads. The sipes combine with the sunflower oil to give you a better bite.

Of course, there are underrunning steel belts for strength. The tire wears out excellently. For instance, its rain grooves widen out with wear. Also, new grooves begin to pop out that were initially hidden internally. So, the tire continues to be useful and performs like brand-new. The warranty covers you for 60k miles. Some say that higher speeds make it noisy. Still, one of the best tires for Mazda MX-5 Miata.

This isn’t just one of the best tires for the Mazda MX5 Miata. You’ll find it being celebrated on most top touring tires’ lists. The P7 Cinturato is a great tire for saving fuel. This is because of the polymers in the tread compound that lower the rolling resistance. The asymmetric tread compound comes with 5 ribs. Along with the wide shoulder blocks, it makes the tire grippier with extra stability.

The grooves evacuate water to prevent hydroplaning. The sipes create a bigger bite on snow and ice as well. Being a touring tire, it is very refined due to the tread design, and polyester beneath. There are steal belts in its internal body for added strength. The treadwear warranty is the best on this list at 70k miles. However, it could be better on snow though.

The Nokian Hakkapeliitta is a Nordic sensation and one of the best tires for Mazda MX-5 Miata. This is a tire of the future that you can get today. It has multi-faceted snow claws and a solid rib that runs through. These give it a great snow grip and stability despite it being non-studded. The Arctic Sense Grip Concept technology adds to this traction. The biology-based Cryo Crystal particles grab on the road.

This tire gets the 3PMSF for its supreme competence in deep snow. The tire is quiet as it is built with electric vehicles in mind. This statement is backed up by its composition from sustainable materials. Also, it is the most fuel-efficient winter tire in the market. This is because its rolling resistance is 5pc lower than the outgoing R2. The interlocking sipes ensure that it wears evenly. The only con is the price, but that just alludes to the high quality.

The second entry from Pirelli on this list is the Snowcontrol Serie 3. The tire maintains softness no matter how cold it gets. So, this contrasts with other winter tires that stiffen up and lose grip. In addition, the steering response is excellent. The handling is finetuned for sports cars. The braking is reliable and it won’t disappoint. So, you can go anywhere no matter how extreme the snow is.

The wear and everything above are because of its tread compound. The tread’s compound and its pattern bring about incorporated propelling in the snow. This makes for a finer ride, but not in terms of quietness. The only reason this is lower than the Hakkapeliitta is its noise levels. But mind you, it still does well for a winter tire.

The ExtremeContact DWS06 comes with reduced rolling resistance for fuel saving. It will bring you high performance throughout the year. It works brilliantly on wet roads due to its X-sipe technology. The treadwear is good and the tire has been priced well. The SportPlus Technology makes it wear better apart from improving its handling. The steering response is also great and so is the braking.

The tire also does well in the snow. The warranty is great for the class at 50k miles and so is the price. It also comes with alignment indicators. Downsides are the cornering ability and the questionable sidewall design. The latter is due to an increase in sidewall stiffness, 35pc more than the previous model. But they’re not enough to remove it from the list of best tires for Mazda MX-5 Miata.

This BFGoodrich tire looks badass but it’s a lot more than that. It is the performance-oriented beast that your little Miata deserves. The tire’s tread profile tunes it for cornering. The g-Force technology enables it to take razer-sharp turns and the directional tread gives it grip. In addition, the ETEC makes sure to prevent slippage.

This tire will also last long and hard due to the advanced mold design. This attribute is unheard of in most of its peers. It is also comfortable, with the Dynamic Suspension System absorbing vibrations. This tire will receive coverage for a respectable 45k miles or 6 years. However, some reviewers do complain about it vibrating. But it can still be compromised on based on the class.

The Pilot Sport 4S is one of the best Miata companions for the summer. This tire is designed to provide you with a tire-burning performance of a lifetime. It will do this on both wet and dry surfaces. The steering response puts its higher-priced rivals to shame. The treadwear is outstanding for the summer performance category. The braking is pretty good on both the surfaces.

This tire also deals well with the heat. The cons are experienced from a comfort standpoint. It does get noisy as you speed up. The ride also gets rougher with the road. However, this is quite common in the class. The tire is priced well and the warranty is also good at 30k miles. In conclusion, it’s truly one of the best tires for the Mazda MX5 Miata.

The Firehawk Indy 500 from Firestone is as cool as its name sounds. This is a NASCAR tire built for the road. The silica compound improves its handling and traction. The tread pattern is asymmetric for improving stability at all speeds. The tire does extremely well on wet tarmac. Its steering capabilities are enhanced by the center-running rib. The tread blocks are large and the sidewall is stiff, for cornering.

The tire is also strong, with two underrunning steel belts. In addition, it does well in terms of comfort. You could be driving recklessly and still not feel a bump on the road. Firestone offer all of this at a reasonable price. Finally, this tire will complement any fast car well. It isn’t just one of the best tires for Mazda MX-5 Miata.

The following guide should answer some important questions about the Mazda Miata.

Are Touring and Grand-Touring Tires the Best Choice for The Mazda MX-5 Miata?

Of course, they are. Like most people, you might not be a track day enthusiast. You just bought or own a Miata for its cruising ability. Like it is mentioned in the intro, the MX-5 is a roadster. This makes it a great choice for a vehicle to take on a road trip. One can open the car’s roof and let their hair down to enjoy. This doesn’t require a fancy ultra-high performance (UHP) setup.

You’ll do great with a set of all-season touring tires. Firstly, these tires are known for their comfortable driving experience. But that’s not all that they offer. While these tires aren’t UHP tires, they certainly can hold their own when you put your foot down. They’re less expensive and will last you a lot longer.

This is what makes the Michelin Premier and the Cinturato P7 special. They can be taken to the limit and back, while maintaining refinement. But they also won’t break your bank and will last tens of thousands of miles.

All-season tires are the go-to choice for majority of people. This is because they will serve you 24/7, 365. Now, these tires will be able to compete with summer tires. But while they seem like a better option, they won’t give you the experience that the best summer tires will. The Pilot Sport 4S and Firehawk Indy 500 are world beaters.

However, most won’t work well in the snow, especially not deep snow. The Miata is a RWD car which is great. But with a set of all-season tires, it lacks confidence on snow. This is why you should keep a set of winter tires for the frostier climates. The Hakkapeliitta R3 and the Winter Snowcontrol Serie 3 will take you through any snowy or icy terrain. They’ll also ensure that you have a fun driving experience.

If you encounter harsh summers and winters both, then you can keep a set of summer performance tires as well.

High-Performance Tires, The Mazda MX-5 Miata, And You

High-performance tires are known for their intelligent handling. They’re also built to handle high speeds and recklessness. The Miata is famous for its handling abilities. This makes UHP tires a perfect fit for those who know how to use them. However, there are some disadvantages though.

High-performance tires are often stiff when it comes to bumps. They’re also noisier at higher speeds and are expensive. Plus, they tend to last a lot less longer if you keep using them. The ExtremeContact DWS06 and the g-Force Comp-2 A/S are free from most of these problems. Hence, they are must haves if you truly want to enjoy the Miata.

But if you’re more budget oriented, you should keep a set of touring tires. These tires will last longer, and will feel smoother. They’re not bad for performance either. Plus, these tires will go easy on your pockets. If you like taking the car out to the track, then you can temporarily put on a set of UHP tires.

Can I take the Miata out offroading?

Nope. While Top Gear might say that you can, you are advised not to. Also, even a set of offroad tires won’t help. This car has a terrible ground clearance for any type of trail. Hence it will be miserable in the great outdoors.